In this post, we will learn about Principal Component Analysis (PCA) — a popular dimensionality reduction technique in Machine Learning. Our goal is to form an intuitive understanding of PCA without going into all the mathematical details.

At the time of writing this post, the population of the United States is roughly 325 million. You may think millions of people will have a million different ideas, opinions, and thoughts, after all, every person is unique. Right?

Let’s say you select 20 top political questions in the United States and ask millions of people to answer these questions using a yes or a no. Here are a few examples

And so on and so forth. Technically, you can get

different answers sets because you have 20 questions and each question has to be answered using a yes or a no.

In practice, you will notice the answer set is much much smaller. In fact, you replace the top 20 questions with a single question

“Are you a democrat or a republican?”

and accurately predict the answer to the rest of the questions with a high degree of accuracy. So, this 20-dimensional data is compressed to a single dimension and not much information is lost!

We will need some mathematical tools to understand PCA and let’s begin with an important concept in statistics called the variance.

Also, note that in Figure 1 (a) the variance is not the same in all directions. The direction of maximum variance is especially important. Let’s see why.

Why do we care about the direction of maximum variance?

Variance encodes information contained in the data. For example, if you had 2D data represented by points with

coordinates. For n such points, you need 2n numbers to represent this data. Consider a special case where for every data point the value along the y-axis was 0 (or constant). This is shown in Figure 2

What is Principal Component Analysis

Now consider a slightly more complicated dataset shown in Figure 3 using red dots. The data is spread in a shape that roughly looks like an ellipse. The major axis of the ellipse is the direction of maximum variance and as we know now, it is the direction of maximum information.  This direction, represented by the blue line in Figure 3, is called the first principal component of the data.

In the beginning of this post, we had mentioned that the biggest motivation for PCA is dimensionality reduction. In other words, we want to capture information contained in the data using fewer dimensions.

Let’s consider the 3D data shown in Figure 4. Every data point has 3 coordinates – x, y, and z which represent their values along the X, Y and Z axes. Notice the three principal components are nothing but a new set of axes because they are perpendicular to each other. We can call these axes formed by the principal components X’, Y’ and Z’.

This may look like a small saving, but if you have 1000 dimensional data, you may be able to reduce the dimension dramatically to maybe just 20 dimensions. In addition to reducing the dimension, PCA will also remove noise in the data.

What are Eigen vectors and Eigen values of a matrix?

In the next section, we will explain step by step how PCA is calculated, but before we do that, we need to understand what Eigen vectors and Eigen values are.

Let us multiply the matrix

and see why I called this vector special. 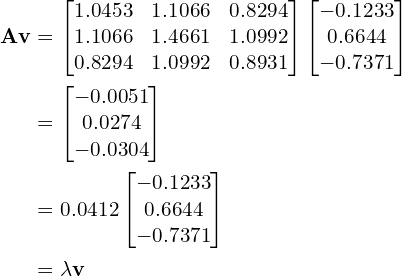 . Notice, when we multiplied the matrix

, it only changed the magnitude of the vector

but did not change its direction. There are only 3 directions ( including the

in the example above ) for which the matrix

So, an Eigen vector

is a vector whose direction does not change when the matrix is multiplied to it. In other words,

How to Calculate PCA?

Usually, you can easily find the principal components of given data using a linear algebra package of your choice. In the next post, we will learn how to use the PCA class in OpenCV. Here, we briefly explain the steps for calculating PCA so you get a sense of how it is implemented in various math packages.

Here are the steps for calculating PCA. We have explained the steps using 3D data for simplicity, but the same idea applies to any number of dimensions.

If you are more interested in why this procedure works, here is an excellent article titled A Geometric Interpretation of the Covariance Matrix.

There is another widespread dimensionality reduction and visualization technique called t-SNE.